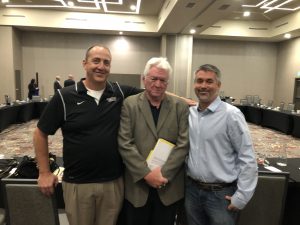 On Monday, October 21st, the Texas University Interscholastic League (UIL) sanctioned water polo as a pilot program beginning in Fall 2021 [since delayed until the fall of 2022]. Congratulations to TISCA Water Polo, Scott Slay, Mac MacDonald, Chris Cullen and Melissa Howard/TISCA Board for their hard work over many years to make this happen. More details to follow but get ready for a very exciting time in the history of Texas Water Polo.

TISCA Water Polo is part of the Texas Interscholastic Swimming Coaches Association and has been operating the official Texas High School Water Polo State Championship since the 1970s. It is an organization of coaches dedicated to the growth of prep water polo in the state of Texas.

The organization’s primary mission is to create an environment to grow the sport of water polo at the high school levels throughout Texas and provide a positive infrastructure for regional and state-wide competition culminating in the Texas High School Water Polo State Championship.

Both boys’ and girls’ high school teams – those that compete under TISCA Water Polo rules – do so every spring. Competition begins after the high school swimming championship in February and concludes in May at the thirty-two team Texas High School Water Polo Championship. Each Region sends their top four finishers from both genders to the State Championship.

TAWPO is the Texas Association of Water Polo Officials, Inc.  The organization is a 501c(3) non-profit organization dedicated to the recruitment, training, assigning, and oversight of water polo referees in the State of Texas for youth, local league, high school, club, college, and masters events.

TAWPO is served by a seven-person board who serve two-year terms. There are three designated area representatives (Houston, DFW, Austin/San Antonio) representing the regions where high school water polo is played in Texas.